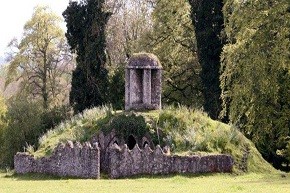 Created between 1740 and 1780 Larchill Arcadian Garden is a ‘Ferme Ornée’ or Ornamental Farm and is the only surviving, near complete, garden of its type in Europe. The Ferme Ornée gardens of the mid 18th century were an expression in landscape gardening of the Romantic Movement. Emulating Arcadia, a pastoral paradise was created to reflect Man’s harmony with the perfection of nature.  Freed from the restrictions of the 17th century formal garden, the Ferme Ornée represented the first move towards the fully fledged landscape parkland designs of Capability Browne.

Although the follies became semi derelict and obscured by undergrowth and trees, the mystery and beauty of Larchill is still recognised.  Folklore stories of hauntings and the ‘strange’ nature of Larchill ensured its continued notoriety.

In 1994 Paddy Bowe, Garden Historian, visited Larchill and was the first to realise that Larchill was indeed a Ferme Ornée and an important ‘lost’ garden, four years of restoration then took place.

Visitors can walk through beech and lime avenues leading from the formal Walled Garden adjoining Larchill House and the Gothicised Farmyard, around an  8 acre Lake, linking follies and gazebo seats, all with marvelous views of the Dublin mountains. The original 18th century layout extended further to include two more lakes,  waterways and a fish hatchery.