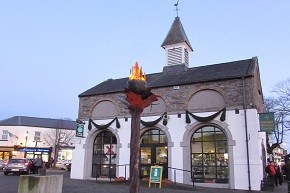 About the Kildare Town Heritage Centre The exhibition in the Kildare Town Heritage Centre is free of charge.

The Heritage of Kildare Town will take you back to the 5th century when St. Brigid established her Christian Church right through the ages of pillaging Vikings and Norman Rule to chic 21st Century shopping at the Kildare Village outlet.  Today you can learn of the notable times of those 1,700 years in a more manageable timeframe starting with a visit to the Kildare Heritage Centre.

The Heritage Centre is housed in an 18th Century Market House adorned by an unusual facade with high windows designed for overlooking the goings on in the market place; upstairs you will find the comprehensive multi-media exhibition depicting the Story of Kildare as mentioned above.  Cogitosus, a 7th Century Monk will be delighted to lead you through this historic display!  Whilst downstairs, our 21st Century helpful staff will assist you with any tourist information you may require.  You might like to do a self-guided tour of the heritage sites aided by the beautifully illustrated 40 page booklet called the ‘Hundred Acres Heritage Trail’.

Much of the Heritage in the area is dominated by association with St Brigid; the patron saint held second in Ireland’s esteem closely following St Patrick, from whom Brigid drew her inspiration.  Each year St Brigid’s feast day on 1st February starts the Féile Bríde, (Brigid’s Festival) a weeklong celebration of the lifelong Christianity and goodness of this saint.  St Brigid’s Cathedral is built on the original grounds of St Brigid’s wooden church under the shelter of an oak tree; just one of the many religious buildings founded by Brigid.  The story goes that the King of Leinster  agreed to give her a plot of land the size of her cloak on which to start a convent, when Brigid lay down her cloak it practically covered the entire grasslands of the Curragh. In the grounds of the Cathedral is the St Brigid’s fire temple, and a small fire is sometimes lit for ritual on St Brigid’s feast day on 1st February. There is also a Round Tower which is the second highest in Ireland but the highest that can still be climbed, a great spot to watch the horse racing in the Curragh!!    St Brigid’s Well is a site of religious devotion, next to the Black Abbey.  The other two abbeys in the area are The White Abbey and The Grey Abbey; the names indicate the colours of the habits worn by the respective orders residing there.  St Brigid’s perpetual flame is housed in the centre of Market Square, beside the Heritage Centre and still today the Sisters of the Brigidine order continue her good work.

History of the Market House 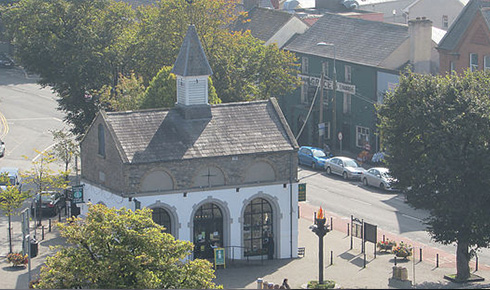 The Kildare Town Heritage Centre is an exciting visitor attraction situated in the picturesque town of Kildare. The centre is an ideal point of departure from which to explore the ancient treasures of the town. It is housed in the restored and refurbished nineteenth century Market House, which is situated in the hub of Kildare town. This unique historic building, with its vista of windows, designed to oversee the market place, has been given a new lease of life and is an impressive addition to the heritage assets of the town.  The Heritage Centre was formally opened on the 17th September 2001 by the then Minister for Finance and T.D. Mr. Charlie McCreevy.

The building has a long and varied history. According to the Statutes of Henry VI (1458) a market had been held in Kildare ‘from time whereof memory runs not,’ and an official weekly market, to be held on Thursdays, was authorised by Henry VIII in the Charter of Kildare of 1515. A survey of the Earl of Kildare’s estate in the town by Emerson in 1674 mentions a town hall but not a Market House. Since the location of the Town Hall cannot be determined we might suggest it was situated here, centrally in what became the Market Square and the focus of activity in the town. Reference to the ‘Market Place’ can be found in the Registry of Deeds Office in 1726 and 1751 and although the recognisable triangular area of the modern ‘Square’ is unnamed in John Rocque’s Map of Kildare of 1757 it was designated the Market Square’ in Thomas Sherrard’s Map of Kildare of 1798 and subsequent maps.

Rocque however does identify ‘The Market House,’ in the centre of what is later known as the Market Square on the site of the modern Heritage Centre. According to Rocque it consisted of three adjoining buildings with a yard in 1757. If we accept Emerson made no mention of a Market House in 1674 because it did not exist, then the Market House was built sometime between 1674 and 1757 (however he may not have mentioned it because it was not part of the Earl of Kildare’s estate, or because the town hall and market place fulfilled the same function at that stage). By 1798 (Sherrard) it had developed into a singular rectangular building on the same site with another section to the Cathedral or western side. This projection had disappeared by 1817 but a small northern (facing Nugent Street/Station Road) projection could be noticed on the 1838 Ordnance Survey Map of the town. Interestingly a well was noted by Rocque in 1757 to the east (Dublin side) of the Market House, a pump in 1817 and a fountain in 1838; presumably referring to the same feature, a water source for the town’s inhabitants. A pump was used on the Market Square until the early 20th century but was eventually removed. In 1973 an ancient well was discovered on the Market Square but filled in for safety reasons. It was re-discovered in 2003 and, now restored, has become a permanent feature on the Market Square.

According to Niall Meagher, former Co. Architect, while it may have incorporated an earlier structure, the present building dates from the nineteenth century. In 1838 the Market House was clearly identified as a public building. Valued at £5 in 1844, it was exempt from rates. Not only was the Market Square a centre of economic activity it provided a space/forum for town gatherings and meetings. This was captured by the ‘Illustrated London News’ on the 8 January 1881 in a drawing of a Land League Meeting, with the Market House in the background, showing leases of the Duke of Leinster being burned on the end of a ‘98 pike. Originally it may have been a single storey building but by the mid-nineteenth century at least it had been re-developed with an upper level. By the mid-1880’s a water tank had been placed in the roof of the Market House as a receptacle for water being pumped from St. John’s Well at Tully.

By the mid-twentieth century the Market House had fallen into disrepair and was bought for £300 by Kildare County Council. It was carefully reconstructed in the early 1970’s and a bus shelter, public toilets and small museum were incorporated into the new building. The cast-iron water gauge dated 1885 was retained on the outside of the building as was a plaque celebrating the completion of the Kildare Waterworks in 1886. It won an An Taisce Award in 1973 because of the improvement it made to the appearance of the town.
A Heritage Project Committee representing the three second-level schools was formed in 1992 to campaign for Heritage Status for the Town of Kildare. The designation of Heritage Town provided an impetus for the reinvigoration of the Market House. The European Development Fund provided £230,000 towards the project with additional funding coming from Kildare County Council (£50,000) and local contributions. Once building began the reconstruction and refurbishment took a little less than 2 years and Kildare Town Heritage Centre was officially unveiled in September 2001.

The Heritage Centre contains a multi-media exhibition centre telling the story of Kildare, past and present, combining attractive fixed panels with a video trail where your host Cogitosus, a 7th century monk will take you on a historic journey from the time when St. Brigid established her church in 480. A.D. This video presentation lasts approximately 12 minutes. The visitor can catch a fascinating glimpse of the past before visiting the many other attractions, which include the Japanese Gardens, the Grand Canal the National Stud and the Curragh racecourse. The Centre is the Regional Tourist Office for local and county-wide tourist information. It also has a vibrant shop where visitors can purchase souvenirs and jewellery.